Keep on reading for our top picks, along with worksheets, lesson plans and other resource recommendations for the passive. Let’s get into the best passive games and activities for English learners.

This is a simple task-based activity that gets students to use the passive form. Put students into pairs or small groups and then have them come up with 3 of the most important inventions of all time. Elicit some answers from the class and then each group can choose a unique one.

After that, each group can do some research using their smartphones about the invention and then make a few sentences using the passive form. I generally require 2-3 sentences/person. For example:

Then, each group can do a short presentation. I make sure to point out that the passive form is a nice choice for this activity because the focus is on the invention, not on the person who invented it.

#2: Why is the Passive Being Used?

A simple activity to help students understand the passive voice is to have them read a passage with examples of both voices. Students can underline the passive sentences and then compare them with their partners.

After that, they can discuss with their partner why that sentence might be passive, instead of active. After that, talk about them together as a class.

3 things is an activity that I use as a quick warmer. However, it can also make a nice review for a lesson on the passive voice. Put students into pairs or groups of three.

Then, ask a question using the passive. Some examples:

Students have to come up with 3 things and then put up their hands. The first team has a chance to answer the question using a passive sentence For example:

The teacher can emphasize the passive form by asking:

Try out this simple error correction exercise in class or assign it for homework. Write some sentences using the passive voice with errors in them. The errors could be related to form or meaning. Get students to correct them and discuss them together as a class. I sometimes think that my students get tired of hearing me talk! If you think that might be the case with your students, consider having another teacher do the heavy lifting. There are lots of nice options on YouTube for explanations and examples of how to use it properly and in what situations.

I love to use some songs and chants in my classes to reinforce concepts in a way that just talking about them can’t. If you’re not musical though (like me!), not to worry. That’s where YouTube comes in. It’s some ESL teaching gold and you’re sure to be able to find something that’ll work in just a few minutes.

It’s possible to plan a speaking lesson to cover just about any topic, including the passive voice. Have a look here at the simple steps you can follow:

Try out this simple activity to get students to make some sentences using the passive voice. Put some things on a tray (for a smaller class) or use a simple picture on a PowerPoint slide (for a bigger class).

Then, have students study it for a minute. After that, cover up the tray and change a couple of things. Or, have another PowerPoint slide prepared. Then, students have to make some sentences. For example:

Of course, point out to the students why you might use the passive voice in this case—because the emphasize is on the objects, not on the teacher who changed them.

If you’re a teacher, then you already know how much time it can save to use what other teachers have created. That’s where these TEFL worksheets come in. Why reinvent the wheel? Here are the top recommendations:

Save a ton of time when planning lessons! Check out some of the top options for ESL passive lesson plans right here:

There are a number of common questions that people have about teaching this important concept. Here are the answers to some of the most popular ones.

How do I teach the passive voice?

There are a few steps to teaching a lesson on the passive voice. First, set the context and then introduce the passive through a reading or listening passage. Have students notice the examples from the text and explain why the passive, instead of the active voice is used. After that, have students do some practice using the passive.

How do you explain the passive voice?

You can explain the passive voice this way: It’s used when the person or object being acted upon by the verb is more important than the object or thing doing the action. For example, “The police case was solved” emphasizes the case, not the policeman/woman who solved it.

What is the passive voice of, “The teacher teaches the students?”

The passive voice of, “The teacher teaches the students” is, “The students were taught by the teacher.”

When should I use the passive voice?

You should use the passive when you want to emphasize the object of a sentence instead of the subject. However, it often creates wordy, unclear and less direct sentences so should only be used in very specific situations and not throughout an entire piece of writing.

When is the passive voice commonly used?

It’s quite common to use the passive voice in legal and scientific writing. It’s also used when talking about crimes when the person who did the crime is unknown. 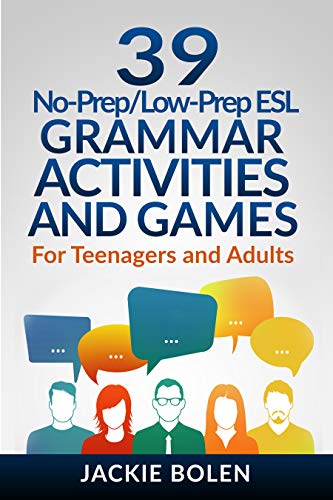 Yes? Then you’re going to love this book: 39 No-Prep/Low-Prep ESL Grammar Activities and Games. The key to better English grammar classes is a wide variety of interesting activities and this book will help you get there in style.

You can find the book in a wide variety of formats. Pick up your copy today and get ready for better English lessons tomorrow:

Do you have any favourite passive activities or games that you like to use in TEFL classes? Leave a comment below and let us know what you think about it. We’d love to hear from you.